The Last Colony by John Scalzi 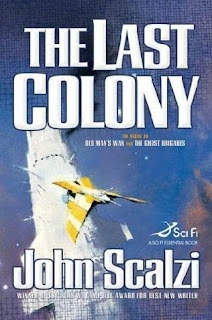 A John Scalzi novel is sort of the antithesis of what I was talking about in my "Reviewing Philosophy" essay. Even eminent theoretician Wendy Pearson pointed out that sometimes theory just doesn't apply. You don't need to interrogate the subtext when it's all out there on the surface. Or, in the words of Duncan Lawie, applying hard-core post-modern theory to a writer like Scalzi would be like stomping puppies. So, keep in mind that I enjoy Scalzi's work and his blogging. I certainly do not want to discourage people from writing and reading entertaining entry-level sf. On other levels, however, Last Colony is not his best work. While I won't rake him over the coals for lack of multi-culturalism, there are other things going on that make this book less than totally satisfying.

Good: the Set Up

In the Old Man's War (OMW) series[1] Scalzi has created a universe that can sustain a wide variety of stories. The basic set up: humanity has moved out to the stars, and the good news is that there are plenty of colonizable worlds. The bad news is that there are lots of aliens with roughly the same biology as ours competing for those worlds. It's a kill-or-be-killed universe out there. So the primary player in human politics is the CDF, the Colonial Defense Force. They draw recruits from Earth, mostly colonists or aged folks to be soldiers, and strictly control the flow of information. Earth remains mostly in naive ignorance about what the universe is really like.

Scalzi drew some flak after the first volume for not challenging this political system. If you didn't know him through other means, it was possible to read about the soldiers, the bureaucracy, the military victories, and assume that Scalzi is a right-winger intent on glorifying the military. In Last Colony he thoroughly deconstructs the political system he created, showing its many gaping flaws. To do so he goes back to John Perry and Jane Sagan, heroes of the first volume, and their adopted daughter Zoe, introduced in Ghost Brigades.

I appreciate what he's done here, and I wholeheartedly support the political impulse that leads him to do it. Military rule unchecked by civilian oversight is a bad thing, as is restriction on the free flow of information. However, unlike Ghost Brigades, the story never unifies all its threads behind that idea. There are some threads that don't contribute to making that argument, and the novel as a whole ends up feeling unfocused. This was particularly disappointing given the excellent thematic drive of Ghost Brigades.

One particular thread that didn't add up involves the alien Obin. In Ghost Brigades, Zoe's natural father defects to their side and uses his neural engineering to give this race consciousness. Prior to that they were sentient beings without consciousness, or perhaps without "souls." Peter Watt's amazing and unsettling Hugo-nominated novel Blindsight also dealt with this concept (in ways that not everyone found convincing). In Ghost Brigades, which was tightly focused on its main character's struggle with identity, it was easy to accept this premise. In Last Colony two Obin stay with Zoe at all times, reverencing her for what her father did for them. They have consciousness modules that they can turn on and off. The difference between "on" and "off" is generally manifested only in terms of experiencing or not experiencing emotions. This did not mesh with my understanding of what consciousness implies for a thinking being. My take on it was that non-conscious beings can do things by instruction or instinct (think termites building architecturally sophisticated mounds), but cannot break their natural reactions or change their own goals. Emotion may be a by-product of consciousness, but it seems that gaining it would have deeper implications than when Star Trek's Data gets an emotion chip.

Now, my take may or may not have any justification. But step back a moment: how does this sub-plot reinforce or add depth to the theme of stopping military/governmental abuses? It doesn't, so far as I can see. The Obin are not a huge part of the story, nor are they that integral to the plot (except inasmuch as they withhold and deliver information that John Perry needs to know). However, the nature of consciousness is an interesting question that gets little serious treatment in this story and seems completely disconnected from the overarching theme of the novel. (It may get more attention in later volumes - one would expect that Zoe's Tale may take a closer look at this.) This is exactly the sort of problem that Ghost Brigades did not have, and Last Colony suffers in comparison.

It probably didn't help that I felt the ending went too far: John Perry ends up unilaterally making decisions that will affect all humanity's chance of survival in the future. He takes a lot of options off the table, and I disagreed with his ultimate choice of tactics. For one thing, unilateral, irrevocable decisions are not exactly democratic, even if meant to restore democracy. Also, I thought of a different way for him to make the same point with less risk of drastically negative consequences, and thus was unhappy with his choice.

As a consequence of the Masterclass, a question I found myself asking is: does this story need to be sf? I think it does in the same way Battlestar Galactica does. Truly existential threats focus the mind wonderfully. Both these series eliminate the question of: "Is the threat really that bad?" For BSG, it's hard to argue with the fact of billions upon billions of dead humans. In OMW, it's hard to argue with expansionist needs and limited territory. Also, some aliens think we're tasty. However, the next move that both these stories make is an impressive one: they undermine the monolithic quality of their existential threats. In BSG the Cylons start squabbling amongst themselves on numerous points, and in Last Colony we find out that different alien races have different factions and agendas, and some of them may be sympathetic to humanity. Or at least, may be willing to talk instead of shoot. SF makes this sort of move particularly dramatic. The history of the field is full of monolithic alien threats (e.g. Heinlein's infamous Bugs in Starship Troopers), so when a fictional work sets them up and then reveals them to be more subtle and nuanced, it has greater impact.

The characterization in this novel is both a strength and a weakness. The strength is that you've got a witty lead character who is likable and competent, a kick-ass female secondary character, and their basically-has-her-sh*t-together young daughter, also empathetic. In the hands of a writer with a real flare of the rhythm of snappy dialog, this makes the story easy and pleasurable to read. However, if you've spent much time reading Whatever, Scalzi's solidly A-List blog, this starts to look suspiciously like a Mary Sue (or at least an author surrogate) set up. John Perry's voice is almost exactly that of John Scalzi on Whatever (they're both from Ohio too, although Perry left for space and Scalzi moved there from California). Jane Sagan, genetically enhanced kick-ass soldier, acts very much like Krissy, Scalzi's much beloved kick-ass wife. And Zoe, the very together pubescent daughter, is sometimes described in exactly the same terms as Athena, Scalzi's very together elementary school-age daughter. In previous books this dynamic was less obvious because the characters didn't spend much time together. In Last Colony they're established as a family unit, and one ceases to be able to separate them from the Scalzi household, at least as it's portrayed on Whatever. Is this good... creepy...? Only you, the reader, can make the call. I found it distracting.

There is no denying that all the OMW books are fun to read. Scalzi's writing style moves the reader breezily through the story, stopping to appreciate the witty dialog and banter along the way. Also, it's good to see him interrogate the assumptions behind the military sub-genre of sf. Sometimes you can talk to the enemy, sometimes the military leadership isn't right, and sometimes you have to do something about that. You can agree or disagree with Perry's ultimate tactics, but it's very hard to argue with his goals.

But that's the problem. He's illustrating something here that most people already agree with. Unchecked military rule is a Bad Thing, as is censorship. These are things that we should fight. However, we don't all have command of space ships, bio-engineered soldier wives, and children who are the idols of a powerful alien race to help us do that. It is as an everyman that Scalzi asks us to identify with Perry, but it's as a man with access to extraordinary powers that Perry is able to correct the situation. There's nothing that schmucks like us, stuck on Earth, would be able to do about a situation like that. Now see, I'm getting too serious about this. We love to read about Heroes Who Fix Things. We've always loved reading about them. I love reading about them. It's why Asimov and Heinlein are still loved today, especially by me. Castigating Scalzi for following those conventions is, you guessed it, like stomping puppies. Still, it'd be great to see a writer of this talent and appeal go for something newer and fresher; something that changes the way we view the world instead of reinforcing the viewpoints of the last 60 years of sf. I can't blame him for doing it, and I wish him all the best sales numbers, but I do yearn for something a bit more.[2]

[1] The series so far includes, in order: Old Man's War, The Ghost Brigades, The Last Colony and Zoe's Tale (out in August), with the independent novella The Sagan Diaries thrown in for flavor.

[2] Whoa, 1600+ words on a Scalzi novel. Between the Masterclass and all that writing for Strange Horizons, something must be affecting my brain.
Posted by Karen Burnham at 13:42