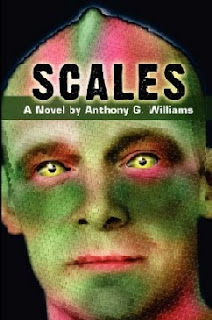 The super-powered character is common in both science fiction and fantasy. Whether it be the farm-boy with untapped magical powers or the power-suited soldier, these characters often carry action-driven plots. Sometimes they can also bring along themes of loneliness and alienation, especially if they are the only magical, power-suited, or otherwise special person around. All that's needed is to be the smartest (Ender's Game, Orson Scott Card, 1985) or maybe telepathic (Slan, A. E. van Vogt, 1946) or super strong (Gladiator, Philip Wylie, 1930). Cade, the hero of Scales, starts out as an unlikely candidate for super-being; he starts out as a middle-aged professor in the middle of England. After an unexplained explosion, he gains super strength, endurance, some telepathy, healing powers, and of course, reptilian scales. As so many authors before him, Anthony Williams uses this hero to examine aspects of our society: how would he be treated, how would he be used, what agendas would surround him? Unfortunately Williams occasionally gives in to the temptation to be politically heavy-handed, but otherwise he delivers an enjoyable story.

An admirable aspect of Williams' story is that it does not ignore the role that the media would play in such an event. Big explosion, guy miraculously survives, now he looks like a half-man, half-lizard -- this is going to get some major press coverage. When it turns out that he has nigh-unto miraculous healing powers, the media coverage would go berserk, and indeed it does. He sets up as a healer at a local hospital, with screeners and plenty of security, but eventually those precautions become inadequate. He gets involved with national security matters, which is reasonable as any government would see his new skills as a major asset. However, after the first assassin comes gunning for him he has to move to an army base, which makes it difficult to continue his healing mission. His involvement with government security work unfolds very logically. First they use him as a lie-detector, then as a sensor looking for terrorist intentions, until finally he's running around on the streets chasing bad guys. Everyone agrees that this is a bad idea: he's rather extraordinary looking, and in these days of cell-phone cameras his presence becomes instantly known. It must be said that all of this works well if you think of it as a comic book rather than a "normal" work of science fiction. Cade is a hero more in the mold of Spider-Man (radioactive spider bite causes survivable and advantageous mutations? Try to suspend your disbelief over that one) than in the mold of Ender Wiggins. You have to give the rather hand-waving "science-y" explanations the benefit of the doubt.

After a personal tragedy causes Cade to take a running vacation across Europe (this phase of the story was even a bit more unbelievable), he is gathered up by the UN to try to help their causes. At this point, Cade gets to find out the cause of his super-state when he is contacted by the aliens from a parallel dimension that caused the original explosion. They are nice aliens, and very advanced. They would like to give us all sorts of cool toys, but only if we agree to make major changes to ourselves in order to protect us from ourselves. Here's where the heavy-handedness sets in. The nice aliens are too darn nice and too close to perfect. The changes they want us to make are mostly of the stop-fighting-and-be-nice-to-one-another-and-the-environment kind, which seems a bit bland. Williams rightly identifies what would be the most controversial of their proposed changes: lowering the birth rate world-wide. While over population is obviously a huge problem facing the world, the story's focus on it ends up making it seem like if we solve that problem, everything else will work out great. This is an over-simplified view of the complex suite of problems facing us today.

In the end, Cade takes a very disturbing course of action that removes the choice from the peoples of the world. This sort of thing is seen in sf and fantasy all the time: it is assumed that the superior hero will obviously make better choices than any imperfect and probably corrupt governmental body, no matter how democratic, ever could. This seems distinctly anti-democratic to me, whenever it pops up in fiction, and it raises red flags for me. It usually works out well in the stories, as the superior hero is generally a benign dictator working for the greater good, but it's still worrying. In reality autocrats don't usually work out so well. After this part of the plot, there are still a few more problems with other extra-dimensional aliens to work out, and Cade has a bit more emotional stuff to get through, but it all feels like a denoument from the part where Cade makes his dramatic choice for the world.

The different phases that Cade's story goes through makes this feel like a fix-up of several short stories, and the story may have worked better were it structured that way. I can certainly see a story series derived from this book doing great in the pages of Analog magazine. Williams' style fits theirs perfectly: the attention to detail, the solid attempt at sf explanations, the rather stilted dialog, the action and problem-solving parts of the plot and Williams' smooth, transparent prose style. He even shares editor Stan Schmidt's political concern with overpopulation. Williams extrapolates how today's society would deal with a phenomenon like Cade very well: the press, the media, the religious zealots, the UN, etc. It's only at the end that he falls into some traps of heavy-handedness and stereotypical characterization. This is an enjoyable read, especially if you don't look too far beneath the surface. It fits in well with the super-hero/thriller plots common to both sf and comic books, and can easily be enjoyed on that level.
Posted by Karen Burnham at 20:41